The Riehle Universal Testing Machine at the Smithsonian Institute was  manufactured in 1893 by Riehle Brothers Machine Company of Philadelphia. Apparently this company was also known in the industry as Riehle Cold Bend Co. as they did tensile testing, or the bending of steel until breaking in order to test its strength. Such a device is commonly referred to as a universal test machine or UTM.

In 1865 Frederick A. Riehlé along with other family members purchased a minority share of Banks, Dinmore & Co. along with its portfolio of patented designs, including a range of scales of various sizes and a line of machinery for testing materials such as iron bars, railroad rails, and concrete. Soon after, Frederick convinced his partners to acquire the assets of Abbott & Co., also a manufacturer of scales, which was in financial difficulty as a result of poor management.  In 1867, Frederick and his brother Henry bought out the other investors and changed the name to Riehlé Brothers. Shortly after Henry’s death in 1890 a competitor paid a large sum of money for Riehlé Brothers’ scale business, allowing Frederick to focus on the testing products.  In 1903 he incorporated as Riehlé Bros. Testing Machine Co.

Although the brothers were in the material testing business as early as 1865, a Norwegian-born American engineer and inventor named Tinius Olsen (1845 – 1932) is sometimes credited with the invention of the UTM. Olsen immigrated to the United States in 1869 and began working as a designer for William Sellers & Co. By 1872 he was employed by Riehlé Brothers as the firm’s superintendent and was the principal designer of Riehl’s testing machines during the 1870s.  By the end of the decade friction was developing between Olson and the brothers and he was terminated in December of 1879. In 1880, Olsen patented a machine of his own design and started the Tinius Olsen Testing Machine Company to produce the device. Also located in Philadelphia, the companies competed into the twentieth century with both companies continuing to develop new testing technology.

A visitors to Riehle.Net told us that, according to sources at Cornell University, Frederick wrote a paper, “Fifty Years of a Businessman’s Life”  in 1916. There is also reported to be a paper on Riehle Bros. written in Philadelphia entitled, “The Company ” (1927).   While we have not been able to locate the latter, “Fifty Years of a Businessman’s Life” is available from Google as a download at no charge.

Frederick’s contribution to Philadelphia’s industrial development is well documented.  In addition to the papers referenced above, we came across the following article excerpt published in 1996:

Philadelphia and Today’s Foundrymen:   Philadelphia, the American city with the strongest historical relation to Germany, was first settled to become the center of the textile industry, especially in the district of Germantown. Later it became a metropolis of the iron, steel, and metals industry. Here the world’s first foundry technical association was established in 1891, and here Frederick A. Riehle of Riehle Bros. Testing Machine Co. was instrumental in laying the groundwork for the American Foundrymen’s Association (AFA).

Henry apparently was a Union soldier in the Civil War, after which he married Clara Watson, daughter of Johannes Watson of Philadelphia who owned or managed an iron chest and safe manufacturing company in Philadelphia and likely was a social acquaintance of the Riehles.  Henry and Clara apparently had at least one child, a son named Otto. Unfortunately we have little additional information about the family.

Even more, we would very much like to get more information about these brothers and their ancestry as at this point we do not even have the names of their parents, let alone the Immigrant Ancestors.  In fact, we are anxious to connect with any of the old Pennsylvania and New Jersey Riehle families who are virtually unrepresented on Riehle.Net.  Please reply below!

Photos of the Riehle UTM Display at the Smithsonian

Sources: Much of this was sourced from various Internet pages including the ones mentioned and linked above but especially Vintagemachinery.org.

I have an original mold (6″ x 12″) for brass casting, with “The Riehle Axiom”, or “One test is worth a thousand expert opinions”. We did one brass casting from it a number of years ago.

Hi folks, here is a photo of the mold. I acquired it from my dad, who possibly had some items tested there. The mold was originally not-covered with the protective coating (not sure what that would be called). My father-in-law was into casting, so he had the mold (that’s what we think it is) coated, and then poured a few castings. 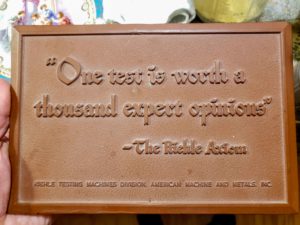 Some of the history of the Riehle company is briefly documented in Frank Tatnall’s book “Tatnall on Testing” who was an employee in the 20s.

Get Your Popcorn Here!